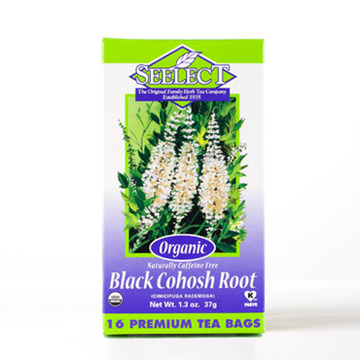 Calming taste with a slightly bitter finish. Largely a tea for the ladies, our Organic Black Cohosh Root Tea is said to help ease the symptoms of menopause and PMS. Tea is vegan, gluten-free, and kosher.
ST-5510
12.44 12.44
$12.44

History & Health:
The most significant part of this native American plant is its hard, knotty rootstock, used for a variety of medicinal purposes. Cohosh comes from an Algonquian word meaning “rough,” a reference to the feel of the rootstock when handled. Black Cohosh Root Tea, also known as bugbane because of its use as an insect repellant in the past, is also known by the names of squaw root and rattle root. Today, it is no longer looked at as a repellant, but is revered for its use in tea. Black Cohosh Root Tea is high in Vitamins A, B, B2, B3, C and K and contains calcium, iron, magnesium, potassium, sodium, and zinc. While this tea is most popular for its use in women’s hormonal issues, it has also been used in China to fight symptoms of colds and coughs. Native Americans used Black Cohosh Root initially, and introduced it to European Colonists.