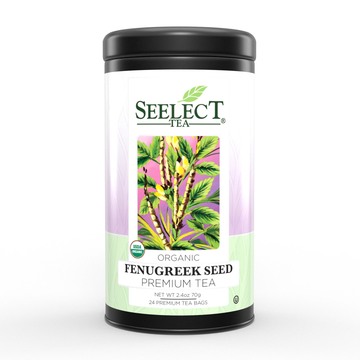 Seelect Tea’s Organic Fenugreek Seed Tea has a unique peppery or licorice flavor. Known for its distinct, genuine flavor, fenugreek seed tea is an herbal tea recognized for its celebrated and historically medicinal past.
ST-31019
$9.10

History & Health:
Fenugreek is an annual plant widely cultivated for culinary purposes. Its seeds were a favorite in ancient Egypt and India and later among the Greek and Romans. Fenugreek is often used as one of the spices of curry and can be used as a salad green as well. The first documented use of fenugreek is dated back to 1500 BC. Used as a kitchen spice as well as a medicinal herb, this herb was initially used in ancient Egyptian embalming as well as used as cattle fodder for the Greeks and Romans. The seeds, which have a sweet taste, are an ingredient in maple flavoring and in Asian and Indian curries. In ancient Chinese traditional medicine, Fenugreek is used to treat kidney problems, arthritis, and to induce lactation. Other great herbal teas by Seelect Tea include Gotu Kola, Papaya Leaf Tea, and Saw Palmetto Berries Tea.