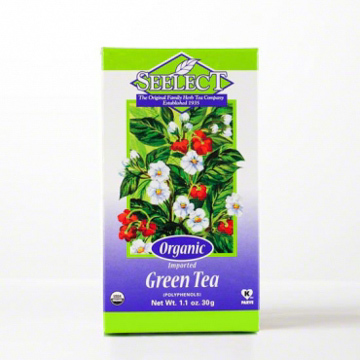 Tea Type:
Green tea, just like black tea, is made from the leaves of the Camellia sinensis bush. These leaves, though, are not allowed to oxidize, leaving green tea with a higher content of antioxidants. Antioxidants fight free radicals in the body, which are damaging compounds which affect DNA, alter cells, and even cause cells to die. Free radicals are likely involved in the aging process, and related to other health issues such as cancer and heart disease. Not sure of your favorite Seelect Tea Green Tea? Make sure to try Organic Green Tea with Lemon Honey, Organic Green Tea with Mint, and Organic Green Tea with Spice Berry as well.

History & Health:
Green tea, the most popular drink of Asia, was originally a drink of lavish luxury, but evolved into a drink of the people. Green tea is the most popular tea in China and for tea drinkers worldwide. Green tea’s history goes back further than any other type of tea, dating all the way back to 2737 BC when Chinese Emperor Shennong accidently discovered a new use. Prior, people originally chewed and ate green tea leaves. But a green tea leaf accidentally fell into a cup of boiling water. Without realizing, Shennong drank the water and liked it so much that he requested that it be made for him on a regular basis going forward. While many other commercial green teas are dyed to enhance their color, our green tea is an all-natural blend. Imported, Seelect’s Green Tea is refreshingly robust, yet delicately delicious.