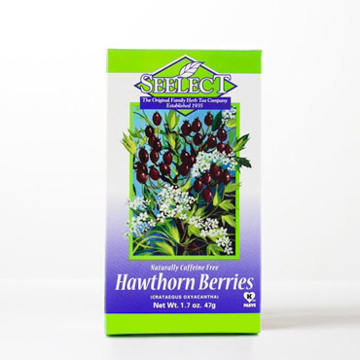 Hawthorn Berries Loose Tea is sweet and robust with a fruity undertone. This tea is one you will want to add to any tea collection. Not only is it a healthful choice, but it is a delicious one too.
ST-30638/L
8.54 8.54
$8.54

History & Health:
The Normandy peasants put sprigs of the Hawthorn tree in their caps to reflect the belief that Christ’s crown of thorns was made of Hawthorn. Used by many Western herbalists, the berries of the Hawthorn plant are harvested when ripe in late summer or early fall. Contrary to belief, Hawthorn berries are not true berries. They are, in fact, most closely related to pears and apples rather than other berries.  Hawthorne Berry Tea has been linked to the dilation of coronary blood vessels lowering cholesterol levels. Additionally, Seeelct Tea’s Hawthorn Berries Tea is known to ease symptoms of heart disease, sore throats, and skin sores. Other nothworthy and healthy teas by Seelect Tea include Elder Berries Tea, Kava Kava Tea, and Organic Red Clover Tea.