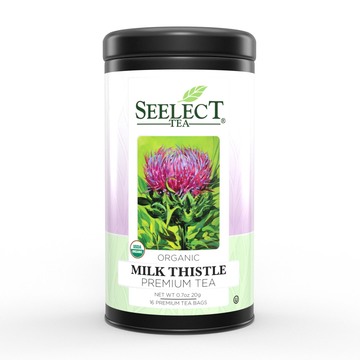 Seelect Tea’s Organic Milk Thistle Tea is gentle and mild, making for an easy-going, enjoyable mug of tea. It also has a history of being a natural liver cleanser and promotes the health and wellness of the overall body.
ST-30651
$10.30

History & Health:
Milk Thistle is a flowering herb, in the same family as sunflowers, ragweed, and daisies. Silybum marianum, milk thistle's botanical name, gets its name from the milky white substance found within the stem and leaves of the plant when cut or picked. Milk thistle is native to the Mediterranean, but eventually made its way throughout the rest of the world to places with similar climate. Historically, the roots of milk thistle have been eaten raw or cooked, however, milk thistle is best known for its use as a tea in treating liver disorders. Milk thistle has been used as a staple in folk medicine for at least the last 2,000 years. Additionally, Seelect Tea’s Organic Milk Thistle Tea can be used to alleviate the effects of a hangover. Other great herbal teas by Seelect Tea include Fennel Seed Tea, Gotu Kola Tea, and Organic Dandelion Leaf Tea.