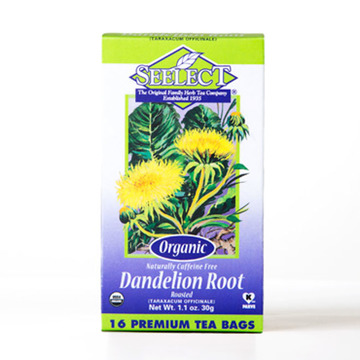 The flavor of Seelect Tea's Organic Dandelion Root Tea is subtle, with a slightly bitter, black licorice taste. Gone are the days when the dandelion was only looked at as an inferior, annoying garden weed.Certified: organic, vegan, gluten-free, and kosher.

History & Health
In the French language, the word ‘dandelion’ is translated to dent de lion, meaning ‘lion’s tooth,’ which transcended from the shape of its toothed leaves. Contrary to what most believe, the dandelion is known as more than just an annoying garden weed. Next time you lean over to pluck such a weed, think about its healing properties instead. Additional teas to try by Seelect Tea include Instant Green Tea Powder Extract, and Organic Daily Diet Tea

Steeping Directions
Pour one cup of fresh boiling water over tea bag, steep 4-6 minutes. The longer the tea steeps, the stronger the flavor. Lemon or honey may be added.